Chicago Fire is an American drama television series created by Michael Brandt and Derek Haas with Dick Wolf as an executive producer. The series revolves around various government agencies in Chicago, Illinois. Chicago Fire chronicles the professional and personal lives of Chicago Fire Department firefighters, rescue personnel, and paramedics at the fictional Firehouse 51. Chicago Fire is one of the longest-running shows on the NBC Network.

It has acquired a strong fan base over the years, which has benefited the series in terms of audience and future series development. After ten seasons, the franchise continues to expand, with a new season set to premiere this year. Fans enjoy watching the episodes which unfold with each new adaptation as the series moves forward to the next chapter.

We’ve put together a quick rundown of everything you need to know about the official release date, plot, and cast, so you can get excited about the next installment and be prepared before the series airs on NBC. Here’s all we know about Chicago Fire Season 11 so far.

Will there be a Season 11 of Chicago Fire?

Yes, Chicago Fire will be returning to your television screen for another season. On February 27, 2020, NBC renewed the series for its ninth, tenth, and eleventh season. The tenth season premiered on September 22, 2021. Moreover, the renewal update was shared on the official Twitter handle of Chicago Fire, quoting, “This news is. #ChicagoFire has been renewed for 3 more seasons!” Take a look at the official announcement below: 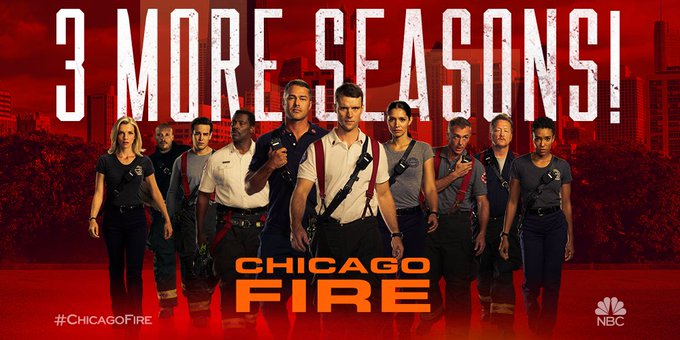 The official press release by NBC for Chicago Fire Season 11 also states, “Chicago Fire will air Wednesdays at 9 PM ET. If you’re a fan of more than just Fire, make sure to catch Chicago Med at 8 PM and enjoy Chicago P.D. at 10 PM, making it a One Chicago night. “

If we have to predict the release date with will be around the months of September to November by considering the pattern of the previous season’s release date. Moreover, we would like to highlight that this is just speculation at this point in time. So, in the next coming months, NBC will reveal and confirm the official release dates for the new season, which fans should keep a watch on.

According to the official description of the series by NBC, states, “NBC’s family of Chicago-set dramas, including Chicago Fire, Chicago Med, and Chicago P.D., has held a longstanding Wednesday night slot, making the Chicago characters like family.

Chicago Fire follows the lives of fires and emergency personnel working for the Chicago Department as they risk their lives tackling various emergencies around the city while simultaneously balancing their own challenges as well. The beloved series boasts a fantastic cast of fire, including fan favorites Kelly Severide (Taylor Kinney) and Stella Kidd (Miranda Rae Mayo), whose relationship has kept viewers glued to their screens.”

The series is expected to stay true to the original premise, as it has for the past ten seasons, which has kept fans loyal to the characters and tuning in to watch new seasons every year. As a result, the basic nature of the upcoming season will remain the same in carrying the real meaning of the franchise. Hence, the upcoming season is expected to pick up from the finale episode of the 10th season, The Magnificent City of Chicago, released on May 25, 2022.

The episode was directed by Reza Tabrizi and written by Andrea Newman & Michael Gilvary. It was estimated that the episode was viewed by 7.03 million US viewers. So, it is this already established premise that will eventually lead to the pilot episode of Chicago Fire Season 11.

The official synopsis of the episode states, “The big wedding day arrives and Firehouse 51 welcomes Casey back to celebrate the joyous occasion; Emma’s plans to replace Violet come to a shocking end..” Take a look at the official promo of Chicago Fire Season 10 Episode 22 below:

The tone for the finale has been set by earlier episodes as every episode has been highly received by viewers who have been following the series since its inception and continue to do so after many years. We have not mentioned all the crucial plotlines in order to avoid giving away everything if you still plan to watch the episode.

But, the viewers get glimpses of the event when the firefighter arrives to deliver his evidence in the finale episode, he notices one of Campbell’s guys brandishing a knife. Severide knocks him out a window to his death following a fight between the two. Severide is visibly shaken by the fact that he killed a guy, but everyone assures him that it was in self-defense.

While it’s difficult to predict the exact plotline for the 10th season this early. It’s been speculated that the new season will take up where the last episode left off in terms of characters and stories for the future season, starting with this precise moment in the final episode to pick up any potential cliffhangers to enlighten the interest of the viewers to see how these people will deal with new found conflicts and relationships.