‘Magnum P.I.’ Might Be Saved: Where Could Season 5 Air?

This is still early stages, but Magnum P.I. fans might have hope that the Season 4 finale isn’t going to be the end.

The drama was one of several shows canceled by CBS on May 12 — Good Sam, How We Roll, and B Positive also got the ax that day — and according to Deadline, Universal Television began to see if it could live on elsewhere. (Magnum P.I. is produced by Universal and CBS Studios.) CBS dramas Evil and SEAL Team have made the move over to Paramount+, but according to the report, NBC or USA Network are “the focus… as a viable option” and “conversations are progressing and are now in advanced stages.”

Because it is a coproduction, CBS Studios has to be part of the conversation, but those talks have reportedly “not started yet.” There is a ticking clock on this, however, with the cast’s contracts expiring at the end of June.

If this does happen — and it is a big if, considering that while some shows (like Brooklyn Nine-Nine, Lucifer, and Manifest) have been saved in the past, it’s not exactly common — there is a question of where Season 5 would air. According to the report, it’s possible that could be on NBC, while reruns would air on USA. 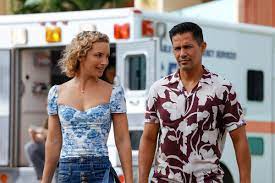 As for why CBS canceled the series after four seasons, “you have some tough decisions to make and you have lots of factors — and I’m not going to rule [the licensing fee] out as one of them,” CBS Entertainment president Kelly Kahl told TVLine in May. “It was a great team to work with, and one of the tougher decisions we had to make.”

“All good thing must come to an end. We made memories I’ll be forever grateful for and thanks to each & every one of you for going on this wild ride with us. It’s all love. Until next time,” Hernandez wrote alongside a photo of the cast after the cancellation. He also shared more pictures on Instagram.

The possibility of Magnum P.I. being saved has to be good news for fans, considering that the Season 4 finale ended with Thomas (Jay Hernandez) and Juliet (Perdita Weeks) admitting their feelings for one another and hesitating to cross that line before kissing. Might we get to see what happens next? After all, they could still decide it’s not worth the risk and try to pretend that kiss didn’t happen.