The “This Is Us” actor is expecting her second child in the fall.

Mandy Moore announced last week that she’s pregnant with her second child, and now she’s giving fans a glimpse of her baby bump.

On Monday, Moore, 38, posted a photo on Instagram in a black-and-white gingham-print sports bra and a pair of matching leggings.

“I was really sick for my first trimester but happy to be feeling better,” she wrote in part.

Moore, 38, and her husband, Taylor Goldsmith, will welcome a baby boy in the fall. They are also parents of a 15-month-old son, Gus.

Moore said goodbye to “This Is Us” with the series finale last month, and is hitting the road on Friday to promote her new album, “In Real Life.”

“One incredibly seminal chapter of my life just ended and the next one, as a mother of two, is about to start… and are we ever so deeply grateful and excited,” she captioned an Instagram on June 3.

“Tour is gonna be slightly different than I expected but I can’t wait,” she added.

Moore played family matriarch Rebecca Pearson through eight decades on “This Is Us.”
In April, Moore’s co-star Sterling K. Brown posted a heartfelt video pleading with Emmy voters to honor his TV mom with a statue. He described her work as “beautifully subtle” and “exquisite.” 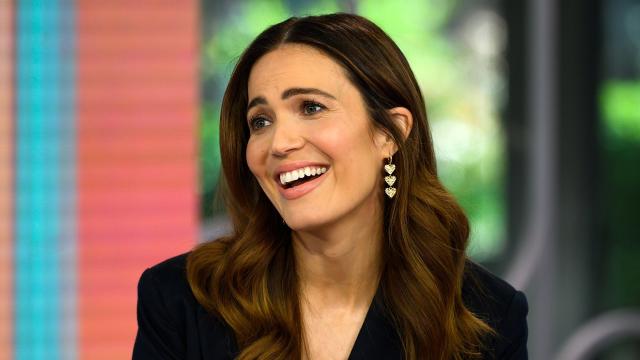 Moore was nominated once for her role as Rebecca Pearson in 2019, but did not win.