The fifth season of The Resident has been packed with change from beginning to nearly the very end so far, and the upcoming finale will deliver something that fans have been waiting a long time for: the return of Emily VanCamp as Nic. VanCamp’s departure was announced over the summer before Season 5, and the show found some powerful ways to handle the goodbye to Nic while she was off-screen, but her return for flashbacks can serve an important purpose for Conrad. Co-showrunner Andrew Chapman previewed what’s on the way, and the chemistry between VanCamp and Matt Czuchry that’s still “electric.”

Conrad has been moving forward as much as possible following the time jump after his wife’s death, but he openly admitted to Billie that “it always comes back to Nic” when he tries to move on, and the walls go up. Their conversation set up Emily VanCamp’s finale return, which will involve a flashback to a night for Conrad and Nic after Gigi was born. Fans will have to wait until the episode on May 17 to see exactly how that goes down, but co-showrunner Andrew Chapman shared with CinemaBlend why he thinks fans will love what happens:

We planned this finale as closure to the Nic/Conrad relationship, and that relationship and that grief and that sense of longing for her has permeated the entire season. And I think it’s permeated the season with our fans too. We’ve had lots of reactions from fans like ‘I miss Nic.’ She left so suddenly and this was really a chance to sew up the relationship and to allow Conrad to move on. And so I think they’ll love that. 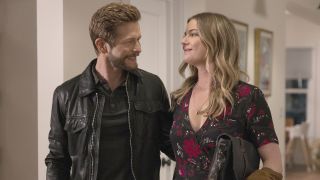 The Resident managed to incorporate Nic in many ways during the fifth season, ranging from Emily VanCamp’s voice cameo early on to Matt Czuchry’s performance over Nic’s hospital bed to Conrad and Gigi meeting the woman who received Nic’s heart, but the actress returning for some flashbacks could deliver the closure that some fans may have been missing. The time jump did part of the job on closing the door on the grief; the flashbacks could do the rest. Andrew Chapman continued:

I expect that they will feel really like a sense of closure with Nic, with Emily VanCamp and allowing us to move on. I mean, she left the show and we knew she was going to leave the show, but we didn’t know she was gonna leave the show quite so suddenly. And that was about a medical emergency. We of course, respected that and only wanted the best, but now that that medical emergency has passed, it was so wonderful to have her back for this episode, so I think they’ll love it.

Considering that Emily VanCamp’s last on-screen appearance as Nic was the Season 4 finale after she and Conrad returned home with baby Gigi, it’s only fitting that she gets her flashback farewell in the Season 5 finale. The timing was fortunate that VanCamp was able to make it work, and based on what Andrew Chapman had to say about her return, the chemistry between her and Matt Czuchry was as strong as ever in her guest star return. When I asked what it was like to see the two longtime co-stars back together again, he shared:

Just so powerful. They were so wonderful through our first four seasons, that relationship. They’re electric on screen. There’s just something about their relationship. It’s so good and so when they fight, when they’re in love, when they are joking, whatever it is… When two actors really just hit it on screen, it’s so hard to put your finger on what it is, that chemistry, but they just had it and it was fabulous to see it. When they’re together, they just light it up. Like you can’t help but watch. You’re so happy to see them as a couple. It’s hard to explain. It’s just this weird chemistry, really. So it was fabulous to watch. Nic and Conrad aren’t going to be together forever after Emily VanCamp returns in the Season 5 finale, but fans don’t have to worry that the spark that made the relationship so unforgettable will be gone. The “electric” and “weird” chemistry that worked so well for VanCamp and Matt Czurchry didn’t fade away just because they spent a season apart.

And Nic’s return for some flashbacks with Conrad isn’t the only exciting thing coming in the Season 5 finale, called “Neon Moon.” While Conrad considers his future – which potentially includes either newcomer Cade or friend Billie – Devon will receive an amazing career opportunity. Ian has to face a diagnosis for what went wrong, and Kit and Bell give them all something to celebrate.

See how The Resident ends its fifth season with the finale on Tuesday, May 17 at 8 p.m. ET on Fox. The network hasn’t renewed the medical drama for Season 6 just yet, but the odds are that Conrad and Co. will be back at Chastain in the fall. For some summer viewing options during hiatus, be sure to check out our 2022 TV premiere schedule.