Wait, Why Haven’t 9-1-1 Or The Resident Been Renewed Or Cancelled Yet?

It was a Red Wedding last week within the TV sphere, as nearly 20 shows were cancelled within 48 hours, adding to the lengthy list of series that have been cancelled or are ending in 2022. Amid the massive bloodbath and just ahead of the 2022 Upfront presentations, Fox seems to be the only network, at this point, that has yet to make big moves, aside axing freshman series Our Kind of People and Pivoting. So where do the 9-1-1s and The Resident stand at this point, and why haven’t they been renewed or cancelled yet?

The lack of renewal decisions for the three dramas is allegedly due to the fact that Fox and the studio that produces them, 20th Television, are not part of the same company, following the Disney acquisition. According to a Deadline, it’s the financial aspect of the potential agreements that’s reportedly making negotiations somewhat challenging. Sources suggest that decisions on the trio of shows won’t be made until sometime around the network’s Upfronts presentation Monday afternoon.

Per the trade, fans likely won’t have to worry about cancellations for 9-1-1, 9-1-1: Lone Star, or The Resident, though. It’s also noted that comedies Call Me Kat and Welcome To Flatch also seem to have a good chance at getting renewals, which will reportedly be announced alongside those of the dramas. If you’re a fan of any of the three shows (like I am), then you’ve probably been waiting anxiously for concrete decisions. It’s comforting to hear that the series could indeed be returning for the 2022-2023 TV season, but I’m not getting too excited until things are made official.

Still, there is reason to feel hopeful for the 9-1-1s, at the very least. Last year, Fox’s President of Entertainment, Michael Thorn, discussed the possibility of expanding the franchise during an interview last year. So unless things have changed drastically, one would assume that the company is still invested in the Ryan Murphy-created procedural franchise. 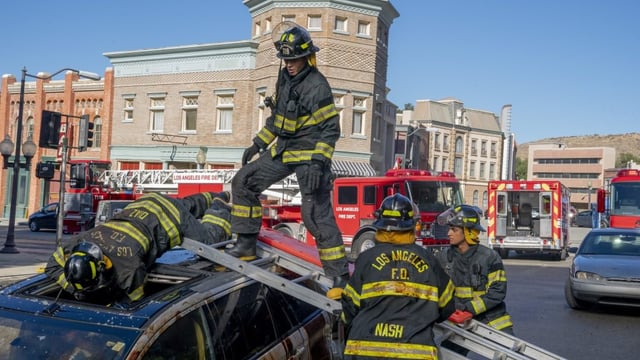 The fandoms, meanwhile, are keeping themselves occupied by looking forward to the much-anticipated season finales. The Season 5 finale of 9-1-1 will not only involve something happening to the ladder truck (AGAIN), but it will also see a a couple get married. Fans are convinced the wedding will turn out to be Hen and Karen’s vow renewal but, at this point, it’s hard to say for sure. As for Lone Star, the 126 will try to save two of their own following a building collapse, and fans may even see T.K. and Carlos get engaged. All in all, it should be an explosive Season 3 finale.

Believe it or not, The Resident’s finale will be a little more heart-wrenching. Following her departure early on in the season, Emily VanCamp appears once more as Nic Nevin through flashbacks. The episode will see Conrad thinking back to a special night between him and Nic, as he tries to come up with a decision about his love life in the present. It will undoubtedly be an emotional roller coaster for viewers, and it’s one you won’t want to miss.

All of these major developments are enough to make one eager for renewals for the aforementioned series. Let’s hope the odds are indeed in their favor. The Fox Upfront presentations are scheduled to happen at 4 p.m. EST on Monday, May 16, so be sure you’re on the look out for updates! And also take a look at CinemaBlend’s 2022 TV schedule for more on what’s coming up throughout the remainder of the year.